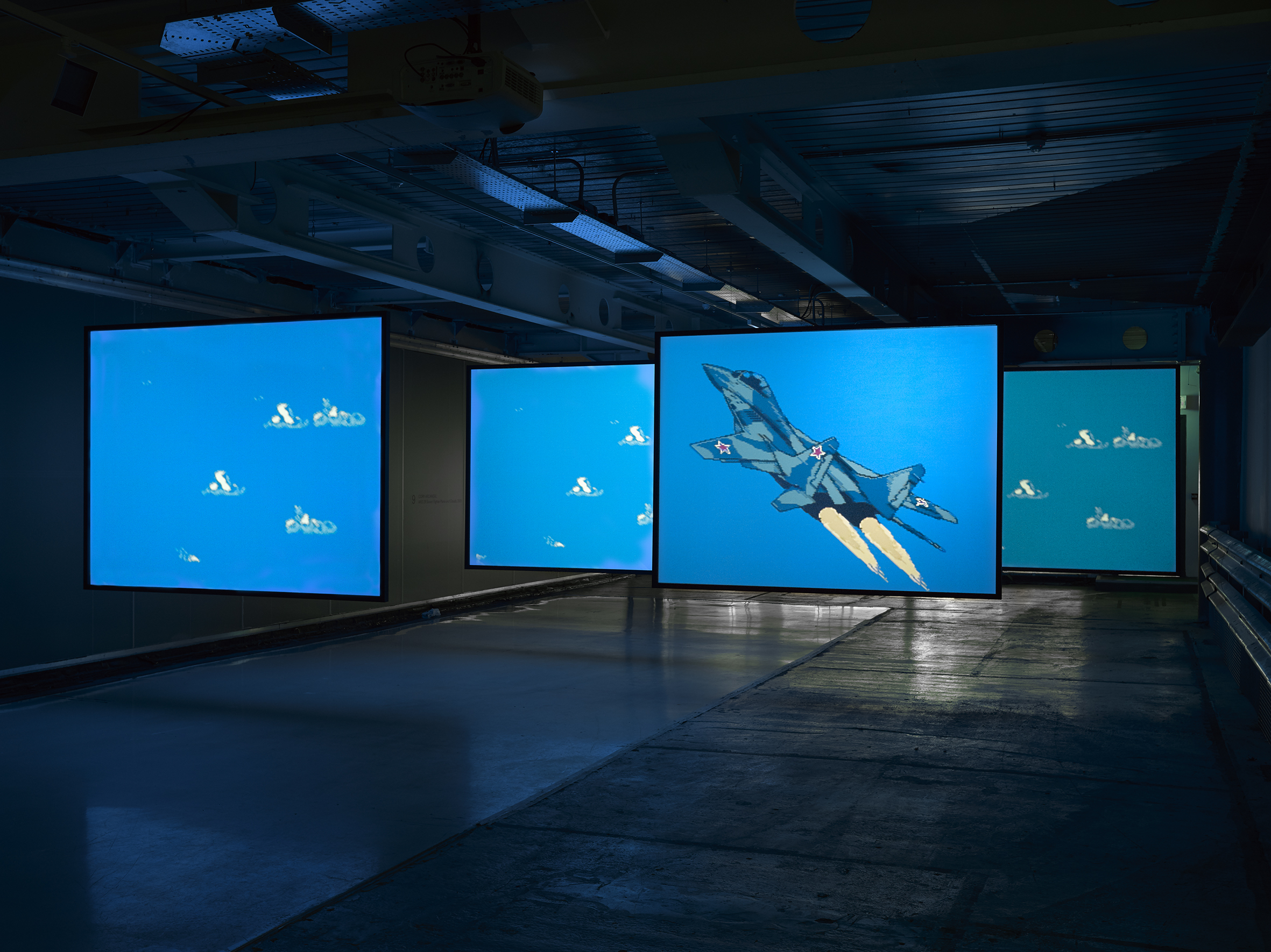 Cory Arcangel (born 1978, USA) is a leading exponent of technology-based art, drawn to video games, software and online platforms for their ability to formulate new communities and traditions and, equally, for their rapid obsolescence.

These four projections depict elements of a hacked video game from the early 1990s, its modified cartridges and Nintendo consoles are also on display as the only other components of the work. This endless intro screen captures a foreboding Soviet fighter jet, partially frozen mid-bombing mission over a nameless Middle Eastern country, suspended next to a trio of scudding clouds and computer-blue skies.

Incorporating hacking as an artistic practice, Arcangel remains faithful to open source culture, making his working methods available online and thus superimposing a perpetual question-mark as to the value
of the art object. 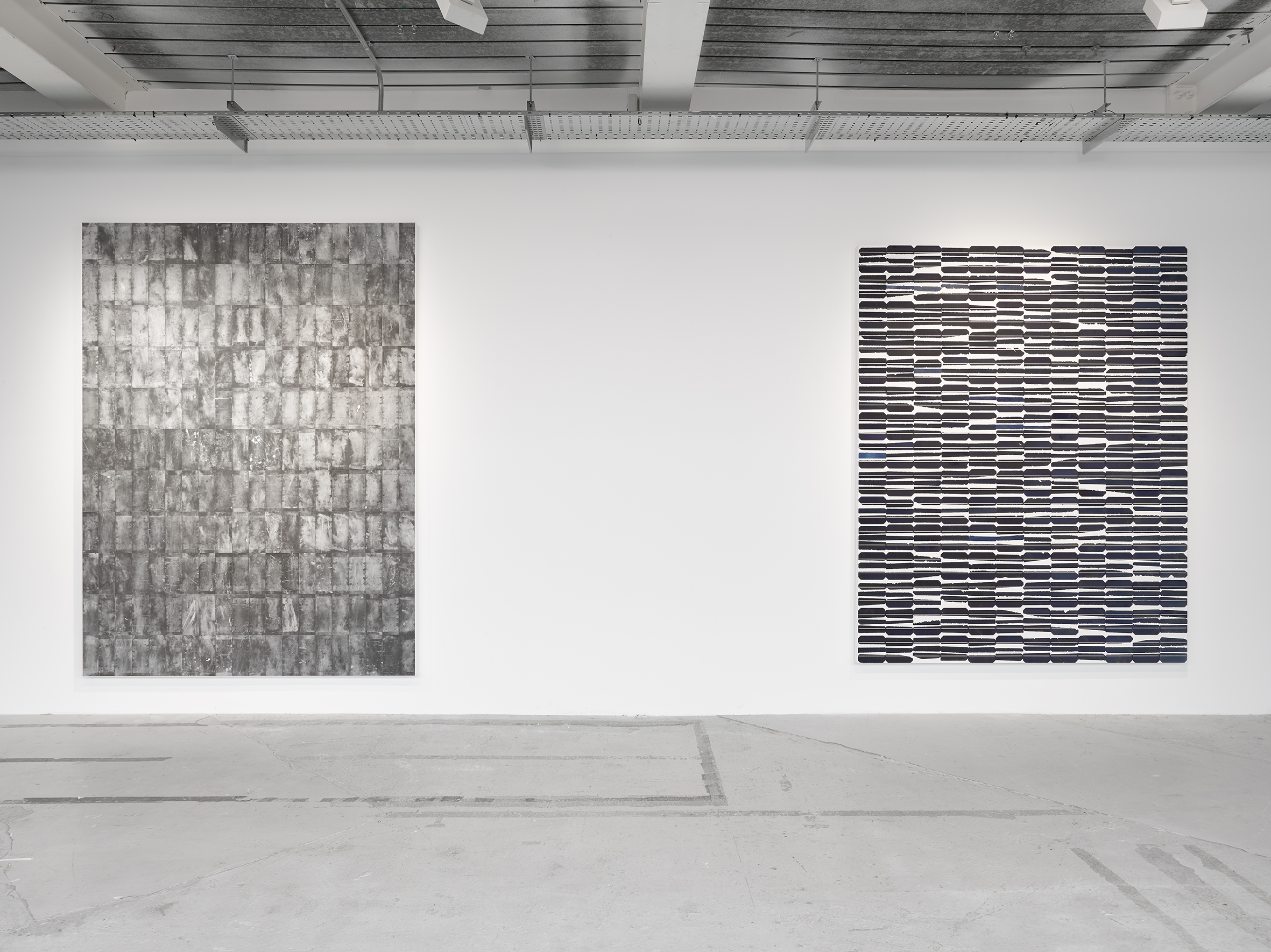 Jennifer Allora & Guillermo Calzadilla (born 1974, USA and 1971, Cuba) identify and stress hairline fractures in societal systems through performance, sculpture, sound, video and photography. Solar Catastrophe continues the artists’ engagement with the political and socio-economic forces at play in their native Puerto Rico, which their exhibition at Lisson Gallery London, ‘Foreign in a Domestic Sense’, expands upon (until 11 November 2017). Made from discarded polycrystalline solar panel cells, which are thrown out every two years, the artists highlight the practice of ‘greenwashing’ a product’s environmental credentials. Constructed in the manner of an abstract painting, the surface of the work absorbs and reflects light, changing colour depending on atmospheric conditions. Shapeshifter is also an abstraction, this time of the marks left on or by used sandpaper sheets, collected from building sites around the world, representing both destruction and construction, human labour and mechanical erasure. 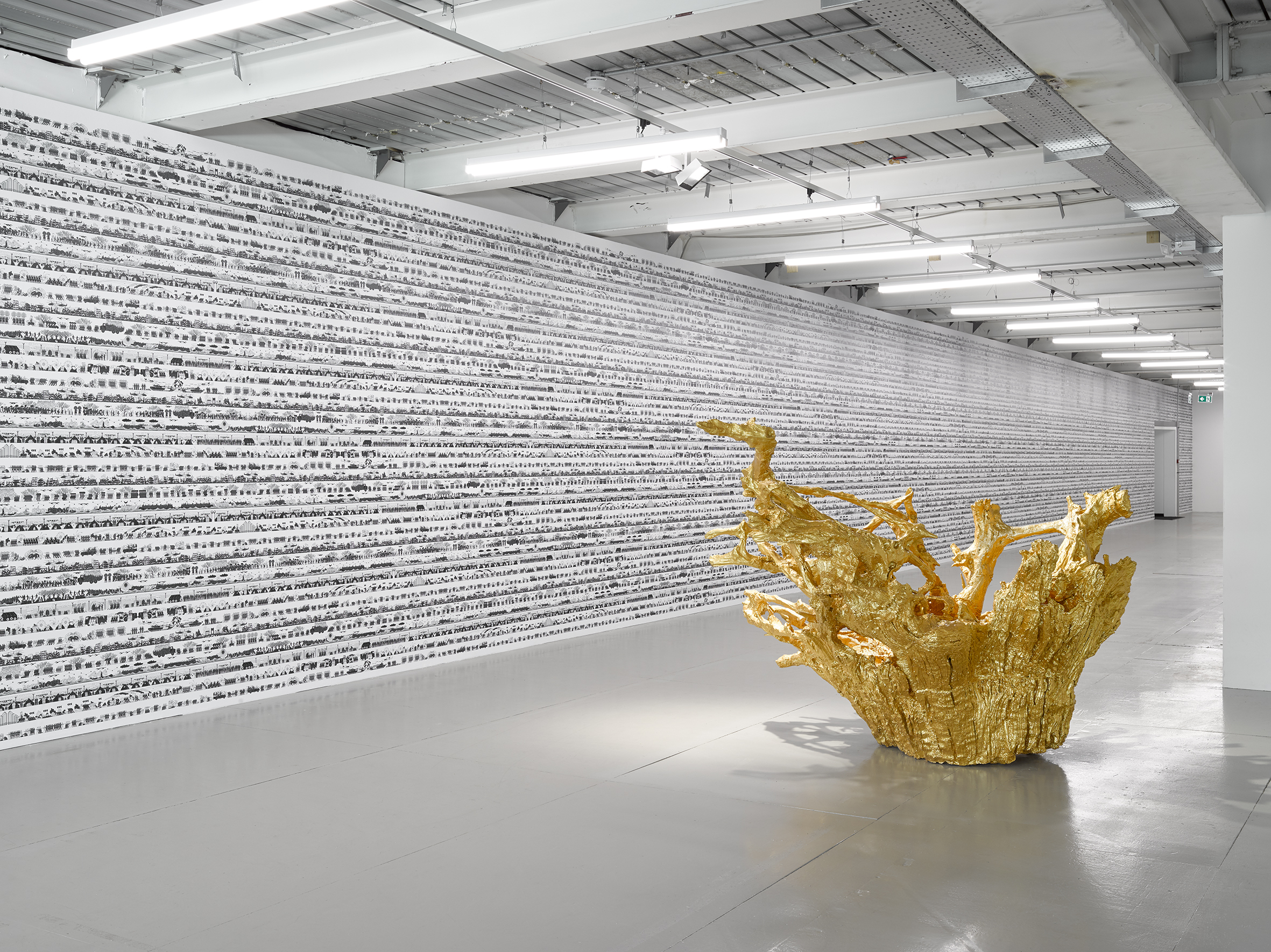 Ai Weiwei (born 1957, China) is a conceptual artist, architect and activist, whose work revolves around the human condition, as well as the social and political contracts that bind and divide us. Revisiting last year’s exhibition at Lisson Gallery in New York, Ai again pairs his epic wallpaper frieze, entitled Odyssey, with a landscape of blasted tree roots – together speaking of displacement, conflict and alienation.

While undoubtedly created against the backdrop of the ongoing global refugee crisis, the iconography of the wallpaper was equally inspired by Greek and Egyptian imagery and by narratives documenting the earliest movements of people. Spanning almost 60 metres of the ground floor space, this journey cycles from past to present, interrupted only by a felled tree trunk in rusted iron and a gleaming cast of a root, sprayed in garish gold car paint. These are also representations of past time immemorial meeting an accelerated modern world. 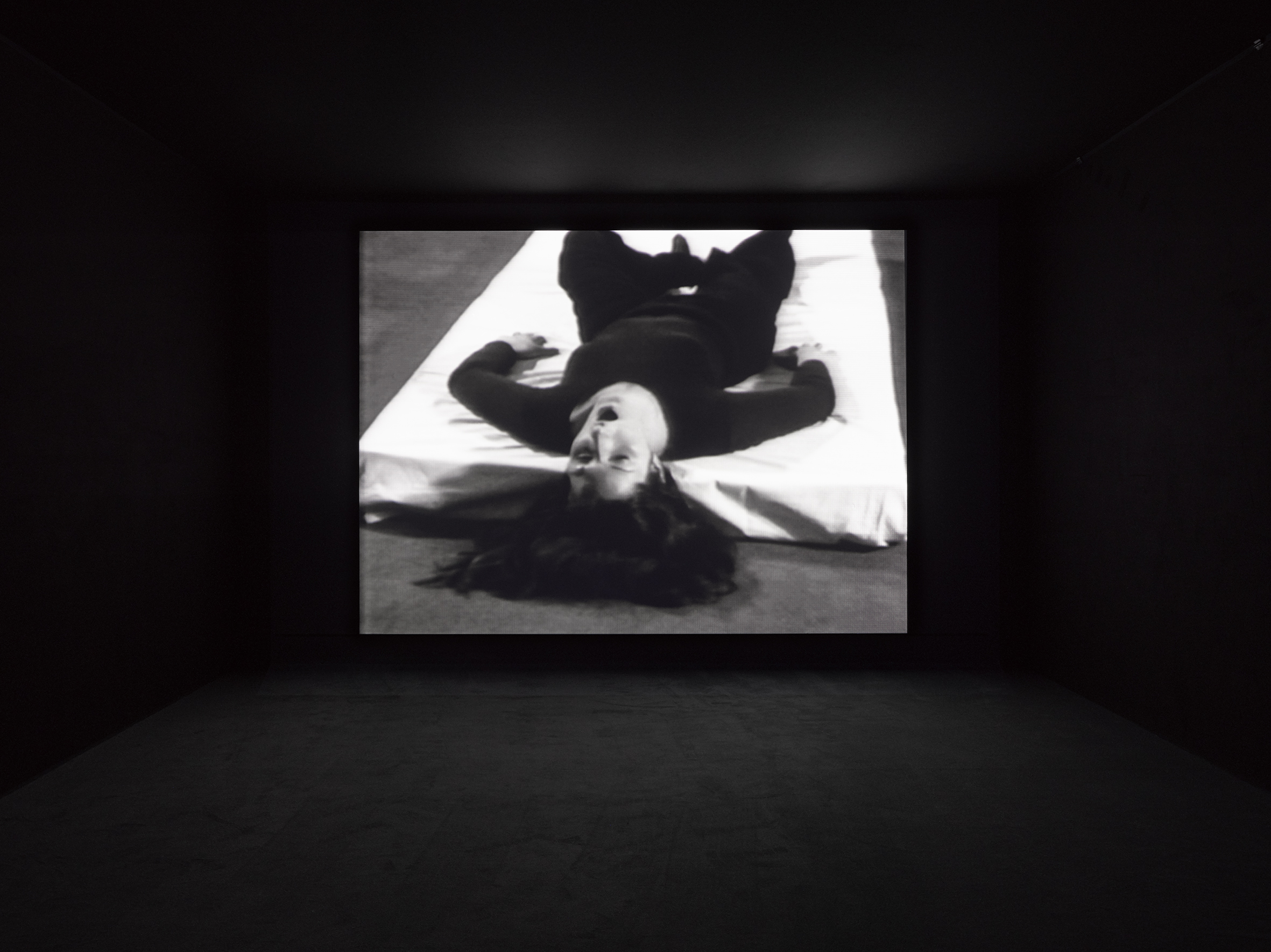 Since the beginning of her career in Belgrade during the early 1970s, Marina Abramović (born 1946, Serbia) has pioneered performance as a visual art form. For this trilogy of works she developed a simple set of scores, the first of which was: “I lie on the floor with my head titled backward. I scream until I lose my voice.” The painful reality and the durational element of Freeing the Voice (the actual performance was over three hours in length, this film version is only 35 minutes long) prefigured her lifelong commitment to such bodily experimentation and was followed by Freeing the Body (55 mins), in which Abramović dances vigorously until exhaustion sets in and she collapses.

By cutting off her own vision with a mask she was further attempting to achieve a higher level of consciousness where there is no fear of pain, death or physical restriction. For the final work and her first purely mental activity, Freeing the Memory (50 mins), she recited every word of Serbian she could recall, including some in English and Dutch, until the well of words has dried and the performance is over.

Welcome to WordPress. This is your first post. Edit or delete it, then start writing!